In his essay on Mali, Bruce Whitehouse of Lehigh University shows how failures of elected leaders, state institutions, and external donors can shift power to the streets and an uncertain contest among armed forces. 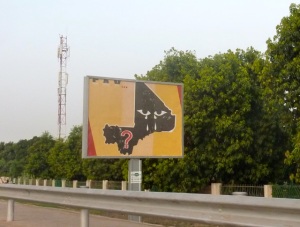 A billboard created by a Bamako artists’ collective, 2012

A few short years ago, Mali was widely regarded as a paragon of democratic institution building in Africa. Today the global news media portray it as just another African war zone. How did it all go wrong?

There was a time when I was optimistic about Mali’s future, and most Malians seemed to share my optimism. When I first worked in Mali in the late 1990s, they believed their country was heading in the right direction. The mood was especially buoyant when I returned for graduate research in mid-2002. Mali had just successfully hosted the African Cup of Nations football tournament for the first time and held elections that saw one elected head of state step down voluntarily and hand power to another—a first in that country’s history. Studies confirmed my impressions from that period: the Afrobarometer Survey, for example, shows that nearly two-thirds of Malians said they were satisfied with their country’s democracy in 2002.

Mali had made real progress: Since the beginning of the democratic transition in 1991 it had held four presidential elections judged free and fair by the international community; it had a vibrant free press; and it had begun a process of political decentralization that enabled people to elect their own local officials for the first time. Economically, too, the country seemed to be on the right track: growth was a respectable five percent per annum, and poverty rates were falling according to government statistics. In terms of social indicators, school enrollment and access to services climbed dramatically from the late 1990s.[i]

Behind the Glowing Façade

The reality was more troubling. The electoral process was marred by consistently weak participation: turnout always remained below 40 percent of eligible voters, the lowest rate in West Africa.[ii] Allegations of fraud tainted public perceptions, and voters felt they had few credible candidates from whom to choose.[iii] President Touré’s “rule by consensus” approach amounted to co-opting all opposition rather than engaging in meaningful debate. In any case, Malian officials had another, far more powerful constituency than the voters to answer to: their aid-dependent government no longer bothered to make its own policies, finding it simpler to accept donors’ agendas–a phenomenon political scientist Isaline Bergamaschi has dubbed “donor-driven ownership.”[iv]

Even some of the most positive indicators could be profoundly misleading. Take public school enrollment, which rose dramatically between 2001 and 2006. It then stagnated, as classrooms became saturated, under-resourced teachers went on strike, and students found it nearly impossible to learn. Following donor precepts, the Malian government increased enrollment rates without investing more in the education sector, which became so dysfunctional that parents actually began taking their children out of school–particularly in overcrowded urban districts, where enrollment dropped six percent from 2006 to 2010.[v]

Erosion of the Rule of Law

Democracy was further undermined by the weak rule of law, as Malians lost faith in their government’s justice and law enforcement institutions. Cases multiplied of ordinary people pushed off their land by politically connected persons in and around Bamako. The courts provided no redress to the victims. From early 2011, Bamako also saw a surge of suspected thieves killed by mobs–sometimes after being snatched from police custody. Bamakois no longer trusted the police to arrest criminals and keep them imprisoned or believed they would be convicted for their crimes.

Elected officials spurned the law to suit their political interests. A former French cultural attaché wrote: “I was surprised that Hawa, a cloth dyer friend, was voting for a notoriously corrupt municipal candidate, although she was always vehemently denouncing the corruption of the political class. She told me that the candidate has promised her not to apply antipollution regulations on her street – where Hawa and her co-wives poured buckets of very toxic chemicals every day [photo below]. When I spoke about these things to my colleagues in the Embassy, they told me that none of this compromised Mali’s democratic processes. The myth of ‘good governance’ was very thick-skinned.”[vi]

In July 2010, as we drove in a taxi to attend a wedding, my friend Nou pointed to Koulouba, the presidential palace, in the distance. «Le pouvoir a démissionné», he told me. “The power has resigned. Power is not there anymore.” “Where is the power, then?” I asked. “The power is in the street,” he replied. His comment was prescient. The democratic state presided by Amadou Toumani Touré, the general who overthrew the dictatorial regime of Moussa Traoré in 1991 and, and who waited a decade to compete in open elections for the presidency, had become an empty shell.

Nou was concerned about Malians’ tendency for disorder, unruliness and rebellion. He saw a constant game of cat and mouse between the government and the people. He preferred a strong state, one that could enforce its laws and protect the public interest from abuses by corrupt elites and ordinary citizens. Nou spoke of the office of the Vérificateur General, an anti-corruption czar appointed by the president. It had been neutralized by influential politicians, particularly in the investigation of embezzlement of millions of dollars from the Office du Niger, a state irrigation project with a large budget. Nou didn’t accuse President Touré directly but believed he turned a blind eye to abuses committed by his associates. The concerns Nou shared that day resonated with much I had been hearing from other Malians. Like Nou, they were frustrated by their leaders’ incompetence and venality and with the deterioration of the capacity and legitimacy of government institutions.

Mali’s coup was not inevitable, and it was not corruption alone that laid low the Malian state last March. The latest Tuareg separatist rebellion, invigorated by heavily armed fighters returning from post-Qaddafi Libya, also played a huge role. The Malian army was too feeble to contain the threat posed by the separatists, not to mention by smugglers and Islamist militants operating in the north of the country. The massacre of 82 Malian soldiers in the northern town of Aguel Hoc on January 24, 2012–one week after the official start of the rebellion–showed the Malian public that their leaders could not even guarantee the safety of their own troops.

Public shock and horror at the slaughter, graphic but dubious photographs of which circulated on the web and via mobile phones, led to demonstrations against President Touré’s rule, and to army wives confronting him on national television, demanding to know why their husbands had not been better armed, equipped and supported. By that point Mali’s head of state had no legitimacy left in the eyes of many Malians, and the coup d’état that followed a few weeks later simply formalized what everyone in Bamako already understood: Touré was finished, and no longer had anything to offer the Malian people and nation. His power had ebbed away onto the streets of Bamako, like the cloth dye and other discarded toxic material.

The task ahead for Mali entails much more than eliminating violent Islamist groups, re-training the army, negotiating with Tuareg leaders, and eventually holding elections. While they are all necessary for the country’s stabilization, the roots of Mali’s misery extend beyond the military coup, Tuareg nationalism, and Al Qaeda in the Islamic Maghreb. The Malian state essentially collapsed in 2012 because it had been eroded from within, and its elected leaders had lost their mandate to lead. A government hailed as a model of stability and popular legitimacy was, in fact, nothing of the sort. This fact was, indeed, known to the same external governments that have since intervened to push back the radical Islamists and must help rebuild a failed state and democracy.

Now dependent on French military protection, Mali is no longer fully sovereign. Stephen Ellis echoes concerns voiced by other scholars such as Jeffrey Herbst and Pierre Englebert: “a major area of attention for policy-makers both in Europe and elsewhere in coming years will surely be the many ‘fragile’ states that enjoy sovereignty but that do not satisfy the conditions required of them by great powers, or in which disorder otherwise poses a threat to international security.”[vii] Is the Mali case unique or is it a harbinger of things to come elsewhere on the African continent? This is a question that deserves consideration by scholars and analysts.

Africa Demos Forum is inspired by the Africa Demos quarterly published by Emory University and the Carter Center, 1990-1995: http://books.northwestern.edu/viewer.html?id=inu:inu-mntb-0006443104-bk