Africa has become a workshop of growth and developmental governance. In the case of Kenya, a dynamic and democratic model is taking shape. Its centerpiece is the devolution of power to sub-national governing units. Virtually every aspect of post-colonial governance must adjust to changes in investment strategy, revenue allocation, infrastructure development, and communications technology. If the decentralizing of power by constitutional means works in Kenya, it will have a powerful impact on many African countries seeking pathways from insecurity and dysfunctional governance.

On August 27, 2010 Kenyans promulgated one of the most progressive constitutions in the world. After more than two decades of false starts, the country finally agreed on a basic law for eastern Africa’s biggest economy. The electoral violence in 2007-8 , which left more than 1,300 dead and 300,000 displaced, served as a wake-up call. In the aftermath, constitutional scholars set to work on a governing framework intended to curb ethnic and political violence in future elections.

Perhaps the most revolutionary feature of the 2010 constitution was the creation of forty-seven sub-national units (counties) with elected assemblies and executives. The counties are constitutionally guaranteed fiscal allocations (at least 15% of audited ordinary revenue) implemented on the basis of population and poverty level. The framers of the constitution realized that the previous winners-take-all system, with an imperial presidency, served to increase the risk of electoral violence and regional development disparities. The new constitution sought to lower the stakes of the presidential election by creating alternative centers of power and patronage. No longer would the president control all of the government’s resources and exercise a monopoly on public policy.

After the March 2013 elections, the opposition alliance, the Coalition for Reform and Democracy (CORD), controlled a plurality of the forty-seven counties in which governors have significant control over policy. They are likely to serve as training grounds for future presidents. Kenya’s new constitutional order has been accompanied by a dynamic economy. With the largest non-mineral economy in Sub-Saharan Africa, Kenya has averaged an annual economic growth rate of over 5% during the last five years. It is projected by the World Bank to reach 7% over the next three years. [1] Fortune Magazine has christened the economy the most attractive investment destination in Africa based on infrastructure investments, newly-discovered oil reserves, a sizeable middle class, and a fast-growing services sector.

As part of an upgrade of the northern corridor transportation system, Kenya is building the first railway line between the country’s coast and central Africa since the British constructed the current railway network in the early 20th century. Oil production is set to begin in 2018. The housing, construction, and consumer-goods sectors are booming. In the last decade, the country has emerged as a critical innovation hub, revolutionizing banking and mobile tele-communications.

Most importantly, the country’s economic growth over the last two decades has largely been driven by a private sector that operates increasingly independent of the political class. Entrepreneurs establish working relationships with the government and opposition alike. [2] In other words, success in the private sector is no longer tightly coupled with direct involvement in politics.

These changes are introducing a political system in which there will no longer be a single preponderant center of power. The Office of the President still retains substantial prerogatives. But the 47 county governors provide alternative centers of political patronage and influence and can therefore counter-balance the presidency. In addition, the other two branches of government – the new bicameral legislature and a reformed judiciary – have robust constitutional powers and are nominally independent of the president. This state of affairs means that Kenyan presidents will be induced to govern more through persuasion than command.

Because of its popularly elected sub-national leadership, Kenya presents an interesting governance experiment in Sub-Saharan Africa. In this sense, the country joins Nigeria and South Africa as countries in which electorally-accountable sub-national executives with fiscal and policy autonomy can set their own development agenda. This is different from other kinds of decentralization efforts in the region in which presidents maintain a grip on local affairs by retaining the power to appoint the executives of districts or their equivalents. [3]

In the short term, the main determinant of the political climate in Kenya will be the struggle to entrench the principles of devolved government. This agenda is principally driven by the main opposition coalition, CORD, and the Council of Governors (a coalition of county executives). The former has a campaign called Okoa Kenya (Save Kenya) that seeks to amend the constitution in order to allocate an even greater share of government revenue to county governments. The campaign also aims to enshrine ethnic inclusivity in the constitution and change the electoral management body (the Independent Electoral and Boundaries Commission) to make it more independent. 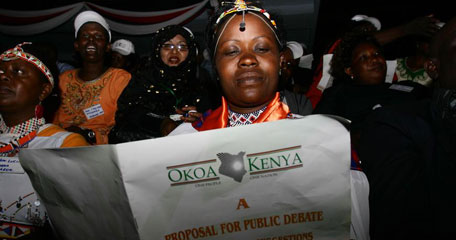 The Council of Governors has a related campaign, Pesa Mashinani (Cash at the Grassroots) that also seeks to increase the share of the national budget provided to the counties. If put to a referendum, this popular idea will likely succeed. During the last three fiscal cycles, there has been a significant increase in the share of the budget allocated to the counties. With the 2017 elections in view, President Uhuru Kenyatta would not want to be on the wrong side of the revenue sharing debate. In the executive budget statement of 2015, for instance, the revenue allocated to the counties for the 2015-16 fiscal year represents 36.9% of the total audited revenues (2012/13), well above the constitutional minimum of 15%. [4]

Despite the benefit of bringing state resources closer to the people, financial outlays to the counties run the risk of hollowing out the central government. Reducing the share of the budget allocated to the central government may further diminish its capacity to provide basic public goods such as security. The administrative shake-up of the Provincial Administration, following the creation of the counties, appears to have limited the ability of the central government to police the country’s periphery – whether in fighting banditry in the northwest or preventing terror attacks by al-Shabaab in the northeast. Matters have not been helped by infighting between governors and central government agents over security policy and infrastructure development. Before the terrorist episode in Garissa on April 2, 2015, for example, credible intelligence of an impending attack was allegedly ignored by county security officials.

Quality of governance and public goods provision at the county level will also be a source of concern in the short to medium term. A sizeable majority of the counties do not have sufficient absorptive capacity to effectively utilize their current budget allocations. This means that healthcare provision and early childhood education, the two main devolved functions, are likely to see a decline in quality while counties develop the institutional infrastructure needed to adequately provide these services.

Needless to say, success in public goods provision at the county level will also require the existence of electoral incentives for governors to perform well. To meet this objective, voters must understand the duties of the two tiers of government. Absent an electoral incentive to perform because voters misunderstand the responsibilities of the different tiers of government, the consequence could be a decline in public goods provision at both national and county levels.

As suggested above, the experiment with devolved government in Kenya will provide vital lessons about sub-national governance in Africa’s multi-ethnic societies. The last quarter century has seen the proliferation of sub-national units in various countries with the express aim of bringing government services closer to the people. But rarely has decentralization been accompanied by constitutionally-mandated fiscal devolution and elections for local executives. [5] For this reason, Kenya offers promising opportunities for comparative research on sub-national government structures and variations in policy outcomes.

[4] This figure was 26.3% of the un-audited revenue from 2014/15, still above the constitutionally-mandated 15%. See Government of Kenya, Division of Revenues Act, 2015. Government Printer.

[5] For example, when Ghana implemented a decentralization program, presidents retained the power to appoint District Chief Executives. The local government reforms, introduced by the Jerry Rawlings military government, was entrenched in the 1992 constitution.

Ken Opalo is a PhD candidate in the Department of Political Science at Stanford University. In  fall 2015, he will begin an appointment as Assistant Professor at the Edmund E. Walsh School of Foreign Service at Georgetown University. Opalo blogs at www.kenopalo.com